Remembering Us Cover Reveal and Excerpt!

I've been anxiously and excitedly waiting for today for WEEKS!

This is my first attempt at a New Adult Romance. It's different :) I hope you like it.

You can add it to your Goodreads TBR here: https://www.goodreads.com/author/dashboard 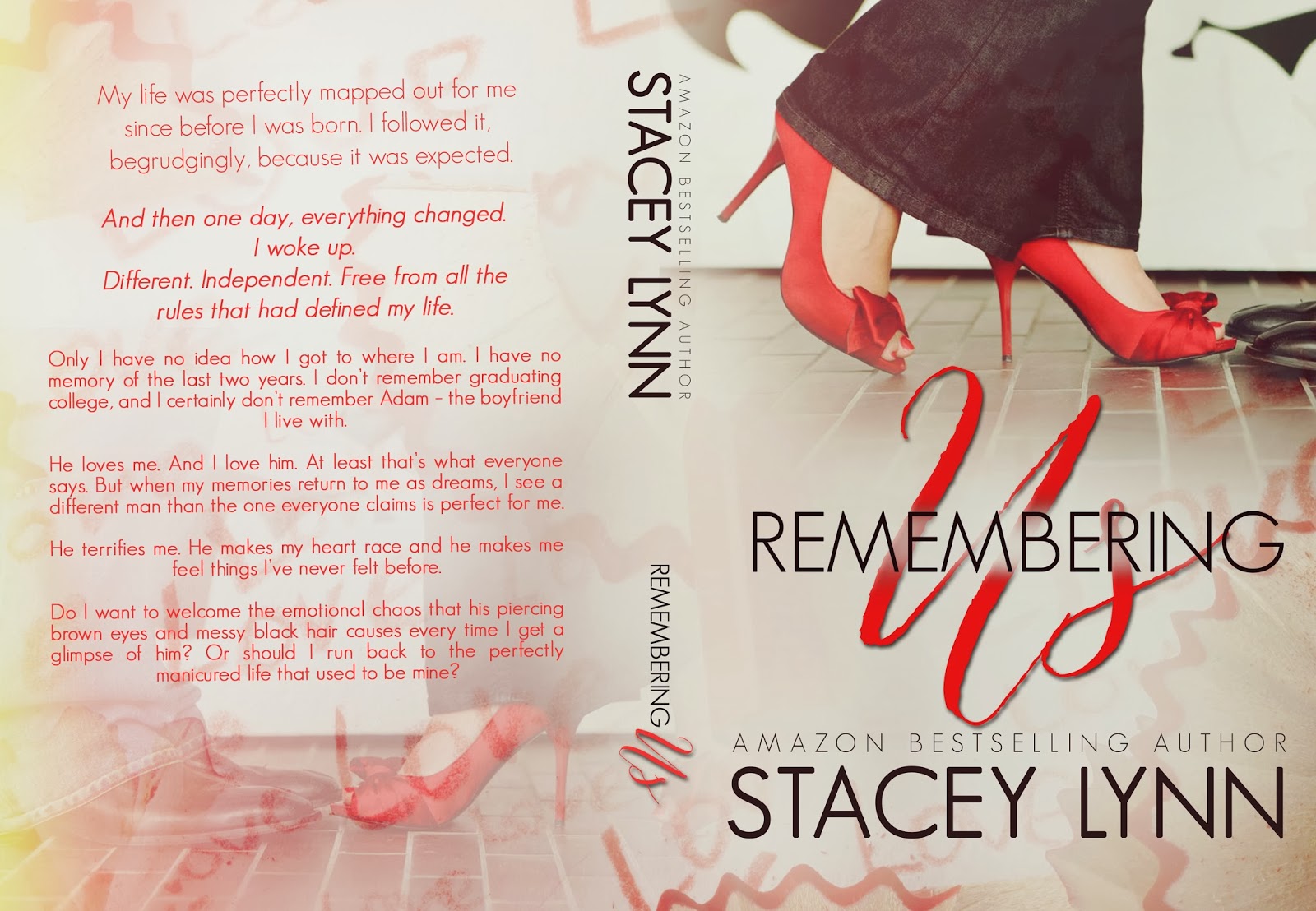 So...what's it about?
SYNOPSIS
My life was perfectly mapped out for me since before the day I was born. I followed it, begrudgingly, because it’s what was expected.
And then one day, everything changed.
I woke up.
Different. Independent. Free from all the rules that had surrounded me.
Only I have no idea how I got to where I am. I have no memory of graduating college. No memory of Adam, the boyfriend I live with.
He loves me. And I love him. At least that’s what everyone says.
Except when my memories return to me as dreams, I see a different man than the one everyone claims is perfect for me.
He terrifies me. He makes my heart race and he makes me feel things I’ve never felt before.
I have no idea if I want to welcome the emotional roller-coaster that his piercing brown eyes and messy black hair puts me on every time I get a glimpse of him, or if I want to run back to the safe shelter of the scripted life-plan that used to be mine.
EXCERPT:
My booted cast scrapes across the pavement. My ankle hurts and my arm is itchy from my cast. The staples in the back of my head were removed last week. Now all I have is a square patch of hair that is just beginning to grow back. I have a gash on my right side that runs from my hip bone almost to my breast. It looks like someone tried to slash me open with a jagged edged knife. The skin is healing, the stitches are innumerable, and every time I turn my torso it feels like someone is trying to rip my kidney out with their bare hands.

There was a hiking accident. That’s all I know. The rest is being left up to my memory that my doctors have assured me will return. How in the hell do they know? What if I never remember? It’s been weeks since I woke up from a coma and I don’t remember anything more than the fact that I live with a stranger and I don’t like him when I dream.

I’m still resting against the side of Adam’s car, fingering the back of my scalp when he comes outside. He stands next to me, crossing his feet at the ankles. We don’t touch. That small whisper of a touch he gave me in the doorway is the first time his hands have touched me since I the day I tripped in our kitchen. His arms reached out and caught me and I froze, paralyzed by having his hands on me. He shook his head, sighed, grabbed his keys and left the apartment and didn’t come back for two hours. When he did, the scent of beer laced his breath.

“I’m sorry I keep getting frustrated with you, Ames.” His head falls and he runs a hand down the front of his face. “I just miss you.”

His voice trembles a little bit and he sounds sad. He looks sad. I wonder what it would feel like to see him smile again like he did the night in my dream. Until the blonde girl, Tina, jumped into his arms he seemed happy to see me. Was he? Was I a game? If so, why am I still here? I press my fingers to my temples, hoping to stave off the beginning thumps of another headache.

I know! It's been so long been since I posted but life has been CRAZY since the release of Just One Week.
So, for the record:
JUST ONE WEEK is now available on
Amazon
Nook
Kobo
Thank you to everyone who has read it already and left a review. Thank you for the messages and comments and emails I have received, DAILY!
It blesses my heart and impacts me in a way that I simply can't describe to know people are not only reading, but connecting with my work.
Thank you - you're amazing.
And now - on to some more good stuff! And the reason for my silence.
I have been a busy little bee :)
Part of the craziness of being a writer is that once you start an idea, more ideas just do. not. stop. coming. I am constantly writing down notes about new characters who pop into mind, conversations, a quick sentence here or there, and sometimes, an entire story line for a new book will pop into my head and refuse to leave until I put pen to paper, and finger tips to keyboard keys and type out the story as fast as I can.
And because of that, I will be revealing a new cover to you soon.
REMEMBERING US will be released in January, 2014. Originally, I thought it was going to be the 14th, but it might come sooner. *shrug* who knows. It'll be done when it's done, I guess.
This is my first attempt at a NEW ADULT ROMANCE and I love the story. I love the characters and I can not WAIT to introduce you to Adam and Amy and hopefully, fall in love with their story.
So what's it about?
Well, I'll talk more about that soon. The cover reveal is scheduled for the 21st so in TEN DAYS you'll be able to see the cover and the synopsis and I'll start posting teasers like a mad woman.
Until then, you can add it on goodreads:
https://www.goodreads.com/book/show/18748216-remembering-us
but there's not much to see :)
AND. Not only that, but I have an entire SERIES screaming at me. Working on a standalone is tough enough with the characters constantly speaking to me, often keeping me awake at night or waking me in the middle of it to write something down.
But this is my first series, and I can't wait. I'm 100 pages into the first draft of the first book, and it's getting GOOD folks.
This will be at least three books. Maybe four - who knows. We'll see what happens. But I have the first three books plotted out for the most part, and yesterday, one of the characters surprised me and started giving me hints about what he might have to say in the future, so like I said - I hear lots of voices and I'm trying to get them down as fast as I can for you!
I haven't ever planned a series before, so I'm nervous and excited and having lots of fun figuring it all out.
So what's it about? Or who?
Daemon and Olivia. Biker children. Born into the life, children of the President and VP. They were all planned to leave the club, the life and their town behind. But then, you know, shit happens and plans change :)
I can't say much more than that. But Olivia is my favorite character to write so far. She's tough. She could kick your ass. Seriously. And mine, too, so I have to be careful with her.
But there's BIKERS. And Motorcycle hotties. And tattoos and hot SEX. Guns and murder. Mayhem. Mischief. Tough men and the strong women who aren't afraid to fight for what they want and put their tough men in their place every once in awhile.
I'm HOPING that the first book of The Nordic Lord series, "Point of Return" will be ready by March.
So that's it. Anything else you want to know?
Follow me on facebook.
www.facebook.com/staceylynnbooks

Posted by Unknown at 2:48 PM No comments: